I was teaching the “Introduction to Finite Element Analysis” training course in Holland recently. A design engineer on the course came up with a good question relating to a graph I had just sketched up on the whiteboard. I was describing how a material will respond to the loading, in terms of its stress and strain, as shown in figure 1. 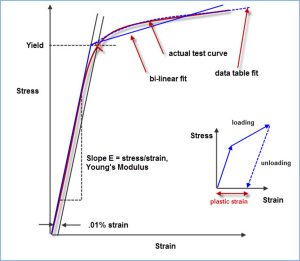 I had described the linear part of the graph as representing Hooke’s Law, and then overlaid a triangle to show that the slope of the linear region of that curve is Young’s Modulus. My questioner wanted to know “why not Young’s Law and Hooke’s Modulus?” – the two seemed interchangeable. Well, the question underlined how easy it is to get confused between the context of the two definitions. So let’s rewind, and think how I could’ve presented this in a better way.

Robert Hooke (1635 to 1703) was the first of the two English gentlemen whose names we are considering. His experiments looked at the relationship between an applied force and the subsequent extension, using structural components. These were mainly simple linear or rotational springs. He was able to show that the relationship between the force and the resultant extension was linear over a large operating range. In particular, he was interested in the application of this to the response of helical watch springs. In fact, his clock inventions formed the basis for a lot of his early wealth.

Hooke’s Law is therefore applied to structural components, from simple linear or rotational springs to very much more complicated structures.

For a rod under axial loading we can show quite easily the stiffness of the component rod is AE/L, where A is the cross-sectional area, E is Young’s modulus and L is the length. So we can use Hooke’s Law to derive F=k*d, or F=(AE/L) *d   where k is the rod axial stiffness, F is the applied force, and d is the deflection we solve for. The graph is shown in figure 2. This is a single degree of freedom (SDOF) solution. 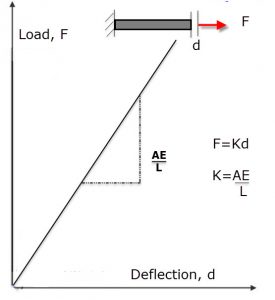 In an FEA simulation more complex structures, with many DOF, are loaded. The complete load versus deflection relationship is defined by the system stiffness matrix. The system stiffness matrix is derived by assembling the stiffness matrix of all the elements. So now {F}= [K]* {d}, where {F} is the applied load vector, [K] is the system stiffness matrix and {d} is the vector of deflections we solve for. The complete structure follows Hooke’s Law. We can in fact break out a single degree of freedom (SDOF), for example at a key deflection. If we plot the total load versus, deflection at this point, we can see Hooke’s Law in action, as shown in figure 3. We can even evaluate the equivalent SDOF stiffness of a structure by loading that point and measuring the deflection, as shown in figure 4. This will now be analogous to the response of an equivalent spring stiffness. This is a very useful method of assessing structural component stiffness in design. This technique allows us to compare load paths within a structure, create boundary conditions, estimate modal stiffness and many other applications. 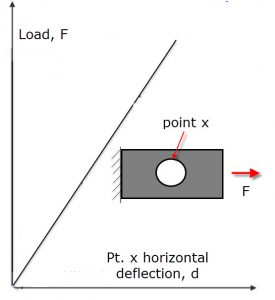 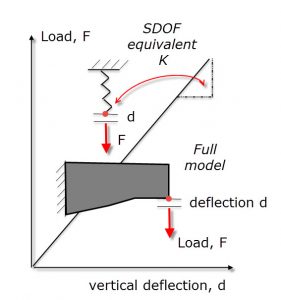 So how did Thomas Young (1773 to 1829) get involved with this? He was concerned with the elasticity of the material itself. So this is much more specific than the general Hooke’s law (which still applies). The linear relationship of the material is what we call Young’s Modulus. He was one of the first researchers to realize that each type of material has its own inherent stiffness, and the relationship is named in honor of him.

The graph in figure 1 shows a typical uniaxial (1D) test result to evaluate Young’s Modulus. A more general 3D stress strain relationship can be derived for Isotropic materials by using Poisson’s ratio (Simeon Poisson 1781 to 1840 – a French gentleman). This relates the axial strain to the transverse strain

In summary Hooke’s Law is an overall structural stiffness term, dependent on the configuration, as well as the inherent material stiffness properties. Whereas Young’s Modulus is specifically the stiffness of the material itself.

So, to use the phrase from the old Abbott and Costello sketch – in our team, Hooke was on First!