The figure shows the first attempt at a nonlinear buckling analysis. It is very disappointing as all we see is an axial shortening with no sign of buckling! 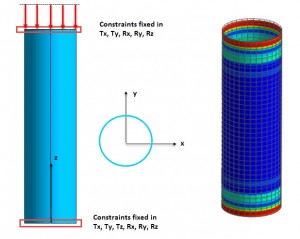 This uncovers another difference between linear and nonlinear buckling. In linear buckling the small perturbations the structure may see are ‘hard wired’ into the solution. For nonlinear analysis the perturbations have to develop geometrically as part of the solution and are not pre-defined in any way. The theoretical solution in the figure totally ignores fundamental facts of nature. No component can be perfectly straight, have perfect constraint application or perfect load application. No material content will be absolutely homogeneous. All these factors give rise in practice to small eccentricities and variations which attract offset axial loading. This in turn starts to produce offset moments which cause further eccentricity. For a very stable real structure no buckling will occur, but for an intermediate category real structure the eccentricities will grow until an instability occurs. In a real slender category structure it will happen more quickly, but probably not as abruptly as the linear Euler solution predicts.

How do we overcome this limitation? Some components and loading will have such a large natural eccentricity that the solution will find an instability. However for our stubborn cylinder we have to introduce an eccentricity. There are several ways of doing this. All methods can benefit from our understanding of the linear buckling mode. The nonlinear mode may transition through this, but it is a good starting point. We can either apply a ‘dummy’ loading to induce the mode shape, or actually distort the structure very slightly in favor of the mode shape. The first method is usually easiest as any sympathetic load will usually work. Pressures are better than point loads as they avoid local singularities. If possible a sympathetic pressure can be applied in the same distribution as the normal displaced mode shape from the linear analysis. It can be captured as a field function and scaled to suit. It is difficult to assess what level of load to apply, but it should be a lot smaller than the main axial loading.

In the case of the cylinder I applied a pressure over one quarter vertical strip to give a net sideways thrust. This dummy static load was set to give a deflection of 3.5e-4m – a very small wall deflection. The best way to do this is to ramp up the dummy load as the main loading is applied, and then to ramp it down to zero until 100 percent main load is achieved. Alternatively a pre-stress load case may be possible, which will not get scaled up as the main loading is increased. The setup will depend on your FEA program. If all else fails you may have to apply a small dummy load which will increase with the main load and be there as a small ‘artifact’ at the end.

The other alternative is to capture the linear buckling mode shape and apply this back to the structural mesh as an initial distortion. Again this can use a field function from the mode which is scaled and used as an offset, or the same thing can be done via an Excel export. Your FEA solver may well have automated ways of handling this. A word of caution here though. If you make the imperfections too big you will effectively corrugate the structure and stiffen it up! Trial and error is required. 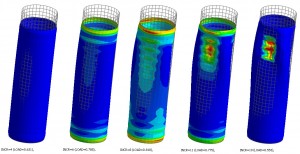 The figure above shows the results of the nonlinear buckling analysis. The cylinder configuration and the level of eccentricity assumed result in a very stable structure which resists buckling until a mode occurs, similar in nature to the linear mode. There is then a transition to a highly localized mode. The initial buckling occurs at around 63% of the linear estimate for critical load. The maximum load level achievable before the structure sees a local collapse is about 82% of the linear critical load.

The nonlinear method used to track the geometric instability was the Arc Length method. This is always recommended as it enables the softening response of the structure to be tracked. When a structure buckles it has less resistance to load. A real world load controlled test would result in a runaway collapse. Alternatively a real world displacement controlled test would allow us to monitor the reducing load resistance. The Arc Length method permits this, even though we are applying load.

Important considerations are; what is the effective critical buckling load level and what is the post buckling behavior? I like to use key point plots to investigate this. The first figure below shows a shell element identified as being a good indicator of the changing stress state as instability occurs. Membrane hoop stress is zero and axial stress is steadily increasing up to the start of instability at point A. This is a classic linear response. From A to B the hoop stress increases as the structure distorts. From B to C a second mode occurs with a further instability local to this element, the axial stress decreases as the structure softens. The overall response in the figure above shows the transition to local dimpling. In fact this region would rapidly exceed yield in practice, but a linear material model has been used. 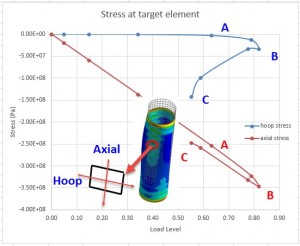 The figure below shows the radial displacement response of two key nodes, one at an outward moving lobe, and one at an inward moving lobe. Corresponding points A, B and C correlate well with figure 10 and confirm the onset of instability.

In practice the model should now be investigated for sensitivity to initial induced eccentricity and preferably comparing several forms of induced eccentricity. Effects of constraint and loading implications can be compared to the real world conditions by experimenting with DOFs and using boundary spring stiffnesses. The load steps can be adjusted to give finer results closer to initial instability. Plastic behavior could also be investigated in the transition to the second instability

Done with this Lesson?

Ready to Talk About it?
Comment in my LinkedIn Group!